Many theories of its origin exist, but when we want the best, we ask for “the Real McCoy”. Elijah McCoy, one of the most influential inventors of the 19th century, invented the first ironing board and lawn sprinkler system. This July marks the 148th anniversary of his lesser known, but equally revolutionary invention –  the “oil-drip cup”. 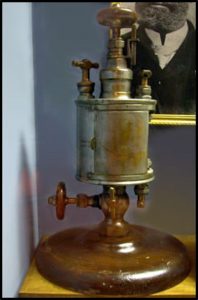 Aided by his parents who fled slavery via the Underground Railroad, McCoy left home at age 15 to study in Scotland. He returned to the U.S. a “master mechanic & engineer” in hopes of landing an engineering position with the railroad, but was only offered the role of “fireman & oilman” – backbreaking, dangerous, and low-paying work. 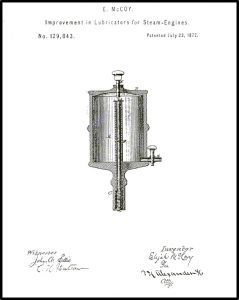 Overqualified and likely frustrated, McCoy invented a “cup” that automatically distributed oil over the engine’s moving parts, rather than requiring a train to stop for a human to manually oil it (much like the Wizard of Oz’s Tin Man).

Many would try (and fail) to replicate McCoy’s “cup”, so when companies wanted the authentic device, they requested “the Real McCoy”. McCoy would ultimately hold 57 patents in Detroit. The Elijah J. McCoy Midwest Regional U.S. Patent and Trademark Office is named for him and his remarkable achievements.