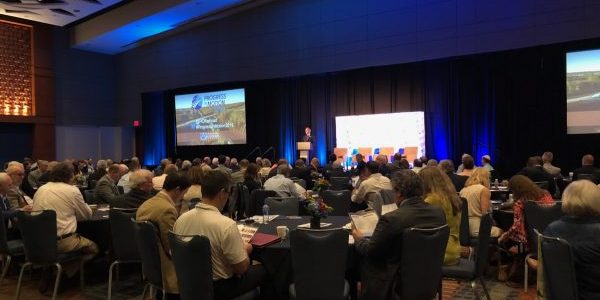 “This is our eighth Forum over ten years now, today bringing 300 people together to discuss the rail industry,” says North Carolina Railroad Company President, Scott Saylor. “There is no other gathering of this kind, and we are proud that the Progress in Motion Rail Forum continues to be such a well-attended, educational and networking event for so many. We have attendees and speakers from six states.”

Chairman of the NCRR Board of Directors, Michael Walters welcomed the approximately 300 attendees to the event. Loretta Boniti, Senior Political Reporter and Host of Spectrum News’ In Focus, moderated the Forum.  Nationally recognized rail industry analyst and president of ABH Consulting, Tony Hatch, provided the opening presentation and shared insights into the current state of the rail industry.

The Forum included breakout sessions and brought the state’s Class I freight rail providers together.  Chris Ingraham, Assistant Vice President of Industrial Development for Norfolk Southern and Kellen Riley, Industrial Development Manager for CSX discussed strategies for identifying industrial site attributes that are required by rail-served companies.  The North Carolina Railroad Company’s Vice Presidents of Engineering and Real Estate were joined by Keith Pugh P.E. with City of High Point, Jerry Allen, with Town of Morrisville and David DeYoung, with Town of Clayton to discuss how they have collaborated on projects that are important to the Railroad and their communities.

Jim Goodmon, CEO and Chairman of Capitol Broadcasting Company, Inc. offered the keynote.  “What we do in transportation is key to economic development. Take a leadership role in what happens in the communities you serve.”

In closing remarks Saylor noted that 2019 marks the 170thanniversary of the North Carolina Railroad. “As we reflect on the Company’s 170-year history, our company and what it means to the state, I can’t help but consider the future.  At NCRR we see incredible opportunities for rail-served industrial growth, the potential for commuter rail, and more opportunities to partner on investments that improve rail infrastructure and positively impact the economy.  Today’s discussions demonstrate that these are key topics across the state and we look forward to continuing that discussion to keep North Carolina moving forward.”