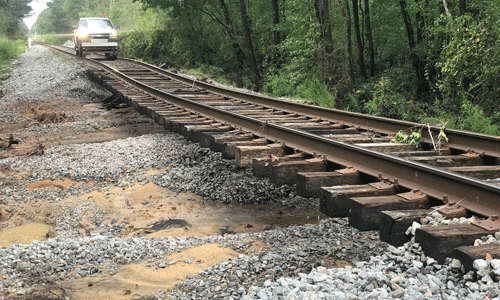 The 2018 hurricane season posed significant impacts to much of North Carolina. In addition to the devastating effects Hurricanes Florence and Michael had on homes and businesses, the storms severely impacted our state’s infrastructure.

The North Carolina Railroad Company leases its 317-miles of tracks, from the Port in Morehead City to Charlotte, to Class I freight rail provider Norfolk Southern. Through this partnership, the engineering team at Norfolk Southern works with NCRR’s Vice President of Engineering, Jim Kessler, to quickly identify damage along the railroad corridor and initiate repairs.

There were eight washouts on the North Carolina Railroad during Hurricane Florence, with most taking place on the eastern portion of the line. The photos above demonstrate damage, repair and restoration of the NCRR line at mile marker 19.5 near the Banks School Road crossing in Kinston.

The damage to infrastructure following a powerful storm can be a substantial threat to the state’s economy even after the storm passes. While portions of major interstates were under water, the 317-mile North Carolina Railroad experienced damage and service outages resulting from rising water levels and high winds. In the days following the hurricanes, Norfolk Southern worked to restore culverts that were washed out, remove downed trees, and repair portions of the track, allowing both freight and passenger trains to resume normal operations on the North Carolina Railroad corridor.

North Carolina’s railroad corridor from Charlotte to Morehead City is open for business, moving people and products to keep the economy in motion.